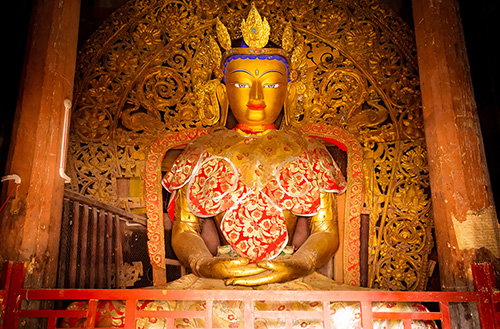 Visit Boudhanath, Some Monasteries at Boudha & Kapan Monastery Today we go to Boudhanath Stupa, one in all the biggest stupas within the international and an critical Buddhist pilgrimage. The vicinity of Boudhnath is also well-known for over 50 Tibetan Gompas or monasteries, additionally being known as the 'Little Tibet'. The Kapan Monastery at Kapan Hill, a few kilometers higher north from Boudhanath is likewise called Nepal Buddhist Mahayana Centre. Kapan Monastery follows the Gelug tradition of Tibetan Mahayana Buddhism under the steerage of Lama Zopa Rinpoche. There is also a nunnery close by the primary monastery, known as the Khachoe Ghakyil Ling Nunnery, domestic to approximately 400 nuns. Overnight at Kathmandu.

Visit Swoyambhunath & Drive to Pokhara We drive to Swoyambhu Stupa in the morning, that's one of the oldest Buddhist monuments in the global with greater than 2000 years of history and also a chief Buddhist pilgrimage. According to legend, the civilization of Kathmandu Valley itself begins with Swoyambhu, which literally means "the self-existent." It is stated that Bodhisattva Manjusri came across a lovely lake whilst touring and noticed a lotus, with thousand golden petals, diamonds pistils, ruby anthers, and lapis lazuli stalk. The legend also says that the lotus seed became planted on a complete moon night with the aid of Bipaswi Buddha himself. In the path of time, Santikarcarya, the king who changed into a Bhikkhu or a monk, raised the primary stupa on the holy web page. After travelling Swayambhunath, we make a 6-hour pressure to Pokhara inside the afternoon to pay our go to to a few Buddhist web sites there. Overnight at Pokhara

Visit Swoyambhunath & Drive to Pokhara We drive to Swoyambhu Stupa inside the morning, that's one of the oldest Buddhist monuments within the world with extra than 2000 years of history and also a main Buddhist pilgrimage. According to legend, the civilization of Kathmandu Valley itself starts with Swoyambhu, which literally method "the self-existent." It is stated that Bodhisattva Manjusri got here throughout a lovely lake at the same time as traveling and noticed a lotus, with thousand golden petals, diamonds pistils, ruby anthers, and lapis lazuli stalk. The legend additionally says that the lotus seed become planted on a complete moon night time by means of Bipaswi Buddha himself. In the direction of time, Santikarcarya, the king who become a Bhikchu or a monk, raised the primary stupa on the holy web site. After travelling Swayambhunath, we make a 6-hour power to Pokhara inside the afternoon to pay our go to to some Buddhist sites there. Overnight at Pokhara.

Today we go to a few Buddhist landmarks in Pokhara and additionally revel in the character's majesty. The big Buddhist stupa of World Peace Pagoda became constructed through Buddhist priests from the Japanese Nipponzan Myohji business enterprise on a slender ridge high above Phewa Tal. Besides being a cultural monument, the website online is also well-known for the panoramic view it gives of the Pokhara Valley. We pass the Phewa Lake on a boat after which hike to the Stupa. Then we can visit the Malepatan Gomba or monastery at Malepatan. Then we make any other hike to Hyangja, the web site for Tibetan refugee camp who fled Tibet after the Cultural Revolution in China. You might also strive the Tibetan sort of foods, bargain for curios, and on the same time acquaint your self with the Tibetan way of life. There is the Tashi Palkhiel monastery inside the way of life of the Karma Kagyu tradition. Overnight at Pokhara.

Drive to Lumbini We drive to Lumbini nowadays - about 290 kilometers south-west from Pokhara which takes for about 6-7 hours. We bid good-bye to the Himalayas in Pokhara, and head closer to a more flat lands of Nepal's Terai. Generally, the weather receives hot and humid within the plains except within the wintry weather. Perhaps, Lumbini is the maximum crucial Buddhist pilgrimage site - the location where Buddha become born. In case we attain Lumbini around the sunset time, we will stroll in the local marketplace to have a glimpse into the neighborhood way of life. Overnight at Lumbini.

Full-Day Explore Lumbini Lumbini is one of the international's predominant non secular, architectural, and ancient locations. We dedicate modern time in traveling as many locations and sites in Lumbini as possible. The region is certainly a large place with monuments, temples, and ancients websites making it a UNESCO World Heritage Site. First, we go to the Mayadevi temple that's constructed on the precise location where Buddha was born. We spend a while wandering across the gardens. We additionally go to the museum and peace pagoda. Some of the essential landmarks and monuments in Lumbini include Ashoka's Pillar erected by using Emperor Ashoka (249 BC) instant of Buddha's birth which additionally has the oldest inscription in Nepal. There are many Buddhist Temples founded with the aid of the devotees from exceptional nations: Tibetan, Chinese, Japanese and Burmese, Korean, and so on. Overnight at Lumbini.

Above price not Include:
Tips, beverage, lunch, and dinner in Kathmandu ad Pokhara, Travel and medical insurance, extra services.