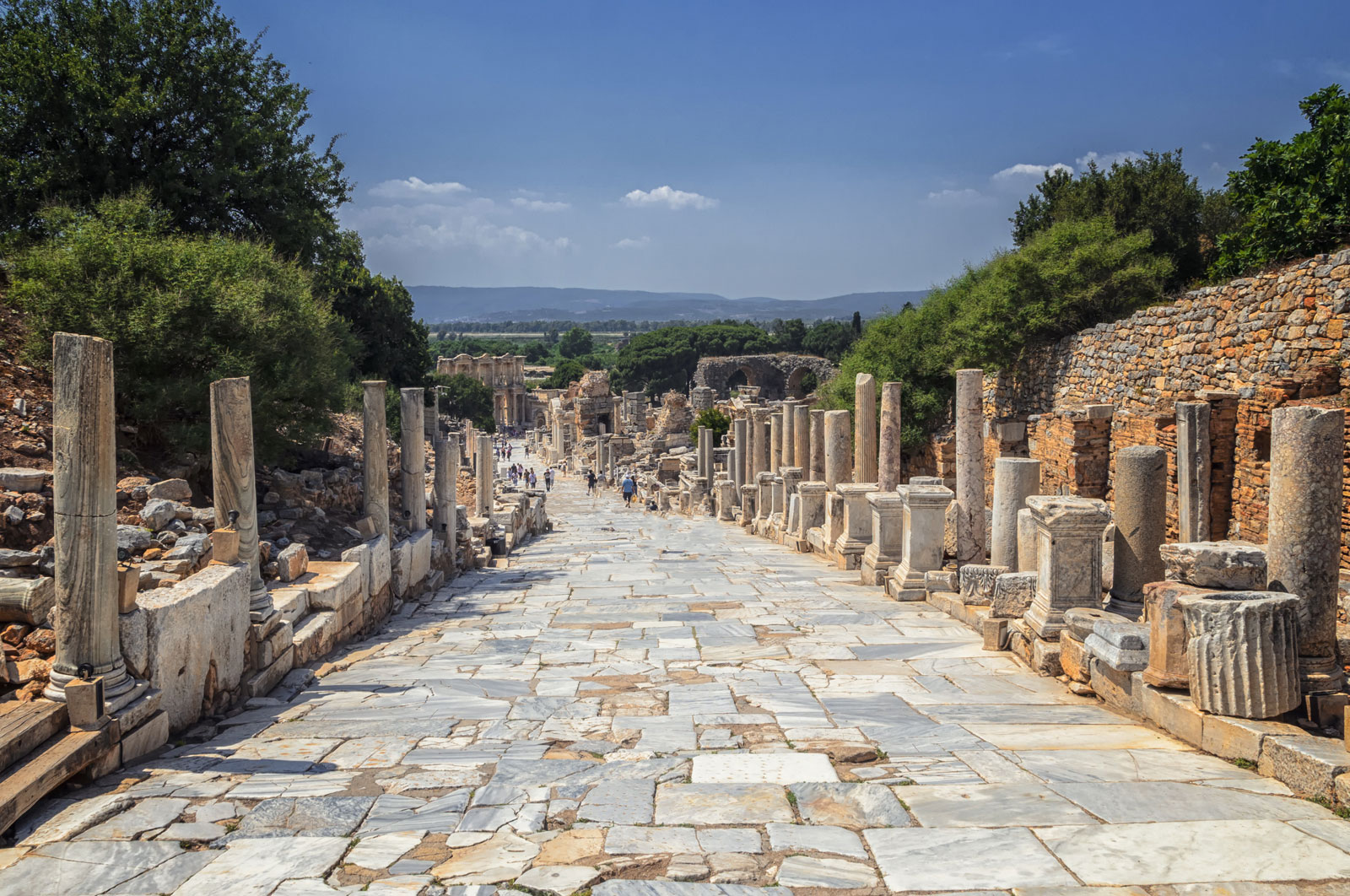 Board on the flight from India to Istanbul International Airport. From here you have to catch a connecting flight to Kayseri. At Kayseri Airport, our tour manager will be present to welcome you and he will lead to your respective hotel room. The remaining day is idle for you from our side. Hang out on the busy streets of Istanbul. Overnight in Istanbul.

After the crispy breakfast from our side, we will move for a tour of Cappadocia. We will start our traversing with a visit to Devrent Valley, Monks Valley, Avanos, and Uchisar. Apart from these places, visit goreme, a kind of open air museum that contains the finest rock-out churches and beautiful frescos. after this we visit kaymakli, the widest underground city of the region. then visit pigeon valley with many different rock formations and hundreds of pigeon houses. dinner at hotel. overnight in cappadocia

Day three of the tour is the traveling day. Have breakfast and head to Kayseri airport for a flight to Izmir. As you land at Izmir airport, our guide will transfer to Kusadasi where your hotel is booked. Check-in your hotel room and get yourself comfortable. The day come to end, enjoy the dinner and have a look of nightlife at Kusadasi.

After a healthy breakfast at the hotel, we are going to move for our full day tour of Greco-Roman city – Ephesus. the temple of hadrian that dedicated to the emperor hadrian in 138 ad. then we visit great theatre, the largest ancient theatre with 25,000 seat capacity. later we visit library of celsius, one of the most beautiful structure of ephesus, built in 117 ad. our last stop is the shire of virgin mary, where mary may have spent her last days. Have a joyful day and return to the hotel by evening. Overnight stay in Kusadasi.

Pack your bags as we are heading to Pamukkale for an adventurous trip. Pamukkale, a cotton castle in turkish, is a natural site that contains hot springs and travertines, terraces or carbonate minerals left by the flowing water. hierapolis is the place where you will see the necropolis, the biggest cemetery of anatolia with 1,200 graves. we will have free time to walk on warm water terraces, where people have bathed in for thousands of years. Also, experience the night beauty of Pamukkale. Overnight stay in Pamukkale.

Eat a good breakfast and start moving to Denizli International Airport with our guide. At Denizli Airport catch a flight to Istanbul. Have a safe and sound trip. After landing at Istanbul, check in to your pre booked hotel. Later Enjoy Bosphorus cruise, through the waterway separating the two continents, europe and asia, with a possibility to take photographs of marble palaces, ancient wooden villas of ottoman architecture besides modern residential and luxurious apartments.  Enjoy the stay in Istanbul.

After breakfast, departure from the hotel with your guide for Old City Tour. Topkap? Palace Museum, that exhibits the imperial collections of the Ottoman Empire and maintains an extensive collection of books and manuscripts in its library. (Topkapi Palace is closed on Tuesdays, Hagia Sophia Museum will be replaced on Tuesdays, Basilica Cistern will be replaced on Mondays). Then bepart for Blue Mosque (Called Sultanahmet Camii in Turkish) is an historical mosque in Istanbul. The mosque is known as the Blue Mosque because of blue tiles surrounding the walls of interior design. (Blue Mosque is closed on Friday, Nuri Osmaniye Mosque will be replaced on Fridays). Later visit Hippodrome of Constantinople, located in Sultanahmet/Istanbul, was a public arena mainly for chariotraces. The oldest monument of Constantinople is the Obelisk in the Hippodrome, which was erected by the emper or The odosius-I in 390. Grand Bazaar, the oldest and the largest covered market place in the world is situated in the center of the city.  In the end of tour, back to hotel. Dinner at the hotel, overnight in Istanbul.

After breakfast at the hotel, free time at leisure till checkout time and transfer to istanbul ataturk airport for your flight to athens. in the evening you may enjoy the optional athens by night tour. overnight in athens.

After a healthy breakfast and get ready for a half day Athens City Tour. We will start our Athens City Tour from the center of Athens. The places which we will see in the Central Athens are Constitution Square (Syntagma), the Parliament, the Memorial to the Unknown Soldier and the National Library. After the central Athens, we will move to the landmark of Athens that is Acropolis Museum. On the way, we will have a look at Panathenaic Stadium, the Temple of Olympian Zeus and Hadrian’s Arch. Panathenaic Stadium is the stadium where the first Modern Era Olympic games were held. As we reach Acropolis Museum, we will get the sight of many other amazing places like the Propylaea, the Temple of Athena Nike, the Erechtheion, and the Parthenon. We assure you that this is going to be the most highlighting experience of the day. So, don’t forget to capture the beautiful moments. Also, at the end of the Athens City tour, we will have a look of New Acropolis Museum. Enjoy the dinner and have a sound night stay in Athens.

Wake up and have a crispy breakfast in the hotel room. Now, get your backs ready as we are moving to Mykonos. Our guide will take you to the Athens Ferry port for a fast ferry ride to Mykonos. After deboarding at the Mykonos Port, check in the pre-booked hotel and rest of the day is for own leisure. So, now you have got two options, either stay at the hotel and enjoy the hospitality or go out and traverse the streets and markets of Mykonos. Have fun in Mykonos.

Mykonos is the place known for its amazing sightseeing. On the 12th day of the Wonders of Greek Island tour package, we are to explore the beauty of Mykonos City and Island. First, we will go for a 4-hour long Island Tour where we will get to see whitewashed villages, pristine beaches, and historic monuments. Whereas in the second half of the day, we will be in Mykonos for the city tour. Places like Cyclades islands, Ano Mera village, sandy shore of Kalafatis, etc will be visited on this day. Enjoy the day and have a nice experience in Mykonos.

Today, we will be moving to Santorini from Mykonos. For this, we have to go for connecting ferry rides. From the Mykonos ferry port, we will be heading to Athens Piraeus and then catch a connecting ferry to Santorini at 0730 hrs. This is going to be an astonishing journey with beautiful scenic places on either side. After landing in Santorini move to your respective Accommodation on Pvt. Basis. The remaining day is idle for from our side, so do stuff according to your point of interest.

In the morning, you will be picked up from a designated pick up point and taken to athinios port in order to take the traditional boat. the first stop is to the islet of neakameni where you’ll have the opportunity to climb to the crater (1 ½ hour). next the boat stops to palaiakameni for a short swim to the hot springs, which are considered to have healing powers (30 minutes). afterwards head to thirassiaisland, where you have 2 hours free to explore the island, swim or have lunch. finally, the boat sails along the coast and ends up to the port of athinios. overnight in santorini.

Have a crispy breakfast in Santorini and get ready for a five-hour long ferry ride to Athens. After reaching Athens, get back to your hotel and take rest. Go out and explore the beautiful malls, shopping marts, casinos, disco, spa, etc at Athens and return back to the hotel by evening.

After a long and memorable tour, it’s the time to go back home. Pack your bags and meet our manager in the hotel lobby. He will guide you to the airport for the flight back home. Enjoy the last journey of the trip.